Lovely KWPN 2019 chestnut filly with loads of chrome. This beautiful lady is bred to be a performance horse with Grand Prix Dressage winners and Grand Prix Jumper winners along with proven Eventing blood, she can do it all. Secretariat as her Great Grandfather is nothing to ignore either.

VIDEO of our "Crushy"

Rhosalina HTF is new to our mare lineup in 2015!

"Rhosie" boasts a very impressive pedigree and was bred by the prestigious Hilltop Farm Inc.  Her sire, Royal Prince,  was Reserve Champion at both his 30-day and 70-day Performance Tests. As a five-year-old he won the East Coast Selection Trials for the World Championships for Young Horses and finished in fourth place at the World Championships for Young Horses. He consistently earned 9's and 10's for his walk, 8's and 9's for his trot, canter, and submissiveness. In the fall of 2007, Royal Prince returned to the show ring and the winner's circle with Michael Bragdell. The pair has shown lightly at Third and Fourth Levels, but have already earned Michael his USDF Bronze Medal and a Reserve Championship at the BLM Finals. Royal Prince is also one of the top Hunter Producing sires in U.S. which we believe this pairing of him and Rhosalina will produce.

Rhosie's dam line is equally impressive. Her dam, Parlez, is one of the most successful dams at Hilltop Farm, having foaled many premium foals and winning Eventing and Dressage offspring.   In 1997, Parlez was the East Coast Mare Champion with ISR/Oldenburg N/A.  She later won her mare performance test and had a successful career in both Eventing and Dressage.

Parlez is by Parabol, Reserve Champion of his Oldenburg Stallion Licensing, as well as Champion of his 100 Day Stallion Testing with a total of 140.32 points.  He showed in Style Jumping before his Grand Prix Dressage career under Scott and Suzanne Hassler.  As a sire, Parabol's offspring successes put him in top German Breeding indexes for many years running.  Parlez's dam, Catinka, was sired by Consul (Swazi - Wendekreis).

Rhosie is a full sister to EM Raja HTF - an AHS Elite Mare in the Hilltop Farm Inc breeding program.

Rhosie herself has fulfilled the promise of her illustrious pedigree, showing great ability in the Dressage arena. Showing through 2nd Level, she earned scores of over 70%.

Rhosie is in foal to GK Calucci, a Holsteiner Grand Prix Show Jumper by Calido I!

UPDATE May 2016 - Rhosie has foaled an absolutely gorgeous black (will grey) colt!  His conformation is fabulous, as is his temperament!  This foal, LJS Colbert, is offered FOR SALE! He should do very well in the hunter ring both i-hand and under saddle, but also would be competitive in dressage. 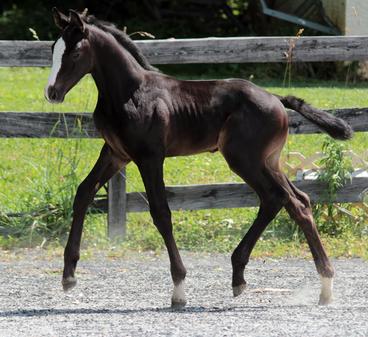 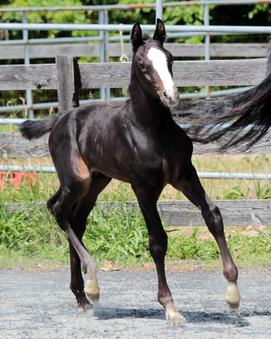