Sire De Laurentis scored impressively high 9's at his stallion testing for character, temperament, willingness, constitution, and walk.  His trot and canter scores were high 8's. A fabulous sire, his foals were most notable for having excellent articulation of the hind leg and correctness of gaits. De Laurentis is by De Niro, the 2008 Hanoverian Stallion of the Year as well as the top 2012 Dressage sire for having the most successful Grand Prix level offspring.  De Niro is by Donnerhall, one of the greatest foundation Dressage Stallions of our generation.

Dam Tela boasts impressive bloodlines as well.  Sired by the Grand Prix Dressage stallion, Tantris, Tela is currently showing 3rd Level herself. Tantris lends his athleticism, versatility, and uphill topline to the mix as well as his physical "stamp".  Telula exudes many of her dam-sire's characteristics. Licensed German Oldenburg stallion Tantris by Traumdeuter out of Rubina-Aktuella by Aktuell-Volturno. Tantris was bred in Germany by Harli Seifert, he stems from the immensely successful German Oldenburg Rudilore dam-line. Tantris was licensed as a two year old stallion at Vechta for German Oldenburg breeding and successfully completed his 100 Day testing at Medingen at three years of age. He sired many successful offspring while balancing a career as a successful Grand Prix dressage horse.

Telula has three gorgeously correct gaits, as well as her sire and dam-sire's work ethics.  A pleasure to work with, she is extremely friendly and has a strong desire to please.  These traits combined with her beautiful physique and gaits suited her well for Dressage and under-saddle work. She also has a lovely jump!

Spring 2017 - ​Telula foaled a gorgeous bay filly by Werbellin (Weltmeyer - Legat)!  This filly is offered FOR SALE   Contact us for more information on Wrighteous LJS !

April 2018 - Telula foaled a beautiful black filly by Special D in the middle of a nor'easter, earning her name! "Nora" has a fantastic temperament and exceptional movement. Offered for sale.

May 2018 update: Telula is confirmed infoal to Rubignon for a 2019 foal. Rubignon, a black 16.2h Oldenburg stallion, listed for the Swedish Dressage team in 2008 and 2009 has 17 GP wins and placings including international wins in his name. Rubignon – Rubinstein/Donnerhall/Pik Solo, 4 generations of Grand Prix and international performance combined with fantastic character, temperament and type. Rubignon’s Dam “Una Donna’ is from the “Utoba” stamm with Samun xx and Vollkorn xx on the bottom. This Stamm produced the licensed stallions Azzarro, Landtinus, the International jumper Figaro’s Boy successful with Ludger Beerbaum and from Una Donna herself Racoon, Una Placida a successful jumper and Rubignon. This foal will be for sale and inutero purchase is also available.

May 2019: Telula foaled a gorgeous, seal brown filly by Rubignon! This filly is ALL personality! Rockafilly LJS possesses an outstanding temperament and phenomenal movement - an FEI prospect! Will be registered AHS this summer. Special consideration pricing if purchased prior to inspection! Offered for sale $12,000. 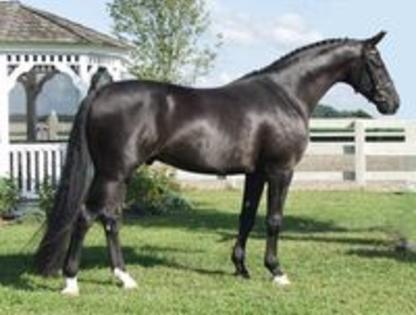